When I grow up

I want to be a mechanic like Megan Fox in Transformers.

That's totes how you look under the hood of a car

No one will really care that I don’t actually know how to fix anything as long as I do stuff like this:

I love getting my hands dirty

In “Revenge,” you flee evil Decepticons for just about the entire movie. At least your male co-stars hauled butt in comfy sneakers — you were in heels!
Megan: Stilettos — and for the last part of the film, motorcycle boots. I had major shinsplints and threw out my back a couple times. Beyond that, Michael likes everyone freakishly tan, so we were painted maroon, like in the old Westerns when they hired Caucasians to play Native Americans. I had on fake eyelashes, running through the desert with sand stuck in them, and I’m sweating off all the makeup. It looked like we were making a tragedy.

For serious???!!! Is that supposed to be a funny anecdote? Because it sounds like a nightmare. But this is just accepted as part of the “Michael Bay experience”. Haha, you know how Bay is! Good times… Argh! I thought she looked dirty in the first film. WTF? So many, many shades of lame.

Here’s an interview with Gabrielle Union re: Bad Boys 2:

UGO:: In that one scene with your wire on that tiny dress – how did that work?

GU: You know, that wire also functioned as my mic for the scene, so it had to work, and we had to make that work. It was very tricky, I will say. Where the pack was…was not the most comfortable of places. You can use your imagination on that one.

UGO:: How are you able to wear those heels?

GU: The Jimmy Choos? They had to go. They cut out this scene where once they save me at the mansion, I have to sprint down the steps, sprint outside, we are running through the thing, jumping into the lagoon, and I am dipping in the grass. They are like, “OK, you look ridiculous.” We had to add this little shot where you see me throwing off my shoes to make it a little more believable, because I was falling down the steps. I was just watching behind-the-scenes footage of the day that we blew up the house, and I’m running down the steps, and you see me falling the whole way down. I don’t know how they cut that together but I was falling the whole way down the steps. It was terrible. Jimmy Choos are made to prance in, not do action movies.

I hate you Michael Bay.

But dammit! It’s just not going to happen. Sorry Andy.

I know “Judd Apatow probably wouldn’t have a career without Kevin Smith” (yeah right), but just because someone came before someone else doesn’t mean that person deserves all this praise and gratitude for opening up some imaginary door, okay? Because the door was never really opened. I can imagine someone running and slamming against that door really hard repeatedly, and then someone coming up behind him and easily turning the knob. It’s like Excalibur, okay? And Judd Apatow is King Arthur. Kevin Smith has never mastered the art of balancing the schmaltz and the ick. Ever. Every time he goes for something heartfelt it comes across as lame, and it’s pretty hard not to get your goal when you go for the gross out effect. And even that felt like he was trying too hard. Oh, you’re shooting an anal scene and you’re sooooo constipated? I wonder if anyone is going to get shit on…? Just stop it.

Every time Elizabeth Banks is supposed to feel something , she got this goofy smile on her face and Andy would ask me, “What the FUCK is she doing?” She’s emoting, Andy. She’s emoting. Because the rest of the world doesn’t know what falling in love looks like, she thought she would break it down nice and easy. I read somewhere that she wanted the audience to really feel that she was “over the moon” for Seth’s character because she never got that impression from Katherine Heigl in Knocked Up. Sure, okay. But I keep thinking of that scene in Knocked Up where Alison and Ben are sitting on her bed and deciding to be together for the baby and Alison asks Ben not to fuck her over and Ben asks her not to fuck HIM over??? I’ll take it. You know why? Because it worked.

Seth Rogen wasn’t much better.  I think both of these actors are hilarious/lovely/good in everything else BUT this movie. This leads me to believe that it’s all Kevin Smith’s fault.  You should’ve let them ad-lib Kevin! It would’ve  improved your script immensely! (*Don’t even get me started on Craig Robinson’s cheesy ass speech at the end of the movie. My ears are still bleeding.)

We love to see you grimace

There’s a McDonalds commercial that comes on the radio every morning when I’m driving to work (one of the many reasons I hate the radio):

Woman (thinking): Oh I know she did not just cut ahead of me in line…(speaks aloud) Excuse me, I know you saw me standing here. You better be glad I already had my <disgusting McDonalds meal of some name or another> or it would be on! Whoooo! *cackling laughter*

Hey drivers/pedestrians? Don’t mind me and my violently swerving vehicle. I’m not actually trying to kill you, my mind just melted. Are there really people out there who listen to that and think, “I’ve been in her shoes! Where’s the nearest McDonalds?”

And speaking of fast food, all free food is not created equal. I’ll get rid of 10 Facebook friends for something delicious, but a Whopper? SICK. My dad used to take advantage of the “whopper for a dollar” thing when I was in grade school/junior high and when picking me and my siblings up, would toss one to each of us with gusto. We’d get excited because we never got to eat out that much. But I’d always eat about a quarter of it and then chuck it. Nevermind the fact that mayo was slathered over every inch of the thing, it just tasted like ass. It’s been well over a decade since I ate a whopper and who knows? They might’ve improved it. But it’s Burger King so I doubt it.

1. Forgetting Sarah Marshall is a horrible movie. HORRIBLE. Who are these people that think it’s “outrageously funny”??? Because that’s what all the reviews said. Are they on crack? They must be on crack. The funniest thing about the movie was Jason Segel’s penis and even that was only sort of funny because…it was right there. Ya know, out in the open. Everything just seemed so forced. The jokes, the conversation, the connection between Mila Kunis and Segel…and the Dracula puppet opera? NO. NOT COOL. Not even Bill Hader could save it for me. Segel is so much better as the sidekick, the greasy creepy friend who says things like, “You know who I wanna bang? Felicity Huffman. After Transamerica I just can’t get her out of my mind.”

I can’t take him seriously romancing a girl, I just can’t. I keep picturing him singing “Lady” to Lindsay and thinking, “You’re so fucking corny!” Maybe he should just be the magical caucasian who has no other duty in life but to prop up his friends and bail them out when necessary. Harsh?

2. Runaways is the shit. Why did it take me so long to read it? Andy has been pressuring me for a while to crack it open. I should’ve known I’d love it since it’s written by Brian K Vaughan (who also wrote Y:The Last Man). It’s the story of these kids who find out a terrible truth about their parents (they’re a part of an evil organization called The Pride…DUNDUNDUN) and then they…run away. No but seriously, action/romance/hilarity ensues. Some kids find out they have powers, others get really cool toys to play with. I’m such a girl but Gert and Chase really make me all warm and fuzzy inside. The sucky thing is, Vaughan is just like Whedon in that he kills off the brightest and the best (even though it’s hard to say that because all of the characters rock) so that your heartstrings get ripped the fuck out. It’s the best.

Since I have been holed up in this house for so long (not anymore…the snow has melted! YES!), I’ve been reading a lot of graphic novels/comics: Watchmen, The House of M, Son of M, and am now reading Madrox. I’m sure Andy is pleased. 🙂

Remember this? Well, the good times just keep on comin’. I’m still wondering why white actresses continue to slap on curly wigs or wear cornrows to appear ethnic/questionable when it would probably be easier (and a helluva lot less distracting) to just go straight to the source.

Okay, I know why. And it pisses me off. 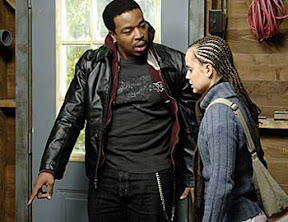 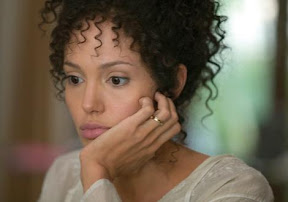 Wow. Why did this need to happen? What’s that? Is that a “direct to video” I see? *slaps forehead* Sweet Jesus. I’m not even going to link to the trailer…so horribly bad.

Who’s hoping that there’s a segment where Corey Feldman treats the audience to his own rendition of…what was Michael Jackson’s latest “hit”…Blood on the Dance Floor?!

The Lost Boys is one of those movies that I will love forever based on the fact that my family and I watched the movie about a hundred times and quoted it often, and … Jason Patric was hot. With about three t’s. Jami Gertz was HILARITY in that movie. Her “dancing” during the greasy gyrating saxophonist concert? Classic. She basically stands on a rock, grooving, with her mouth open for at least a full minute. Gaping mouth apparently = sexy. And her delivery gets me time and time again.

“Staaaaaaaaaaaaaaar.” (said with mouth open, in a dizzingly stupid fashion)