Lately Zain and Mad, but mostly Mad, have been asking Andy and I to sing to them REPEATEDLY before they decide to finally go the f@%^ to sleep. Andy wrote this really beautiful poetic song for them about sheep in the meadow and widows at the well and they LOVE it. “Sing Sheep in the Meadow!” they cry in between the CLASSIC “Uh-oh. Have to go potty!” fake-outs.

After I sing Sheep in the Meadow a couple times, Mad inevitably asks me to sing Downbound Train to him. Turns out he’s a Springsteen fan, just like his dad. I don’t know all of the words and also Springsteen sings with marbles in his mouth so I usually just make garbled noises when I sing along. Andy finally buckled and looked up the lyrics so that he could sing him the damn thing, but I am having way too much fun just coming up with my own.

*singing* I don’t know…the words to this song, but you’re gonna…sing along.

Me: And I got laid off and I had no job and then I had to get…another job.

Me: *remembering some words* And now I’m working down at the –

Me: where all it does is rain. Don’t you feel like you’re on a ride on a –

And he sings in his precious baby voice unintelligibly and then I have to -HAVE TO- snack on his neck.

This kid never stops moving, for real. And I love it. I’ll miss it when he’s on the outside. Heh – that kind of makes him sound like a prison convict.

Black, white and red all over

I get so many compliments when I wear this red dress that I almost feel silly wearing it to work. I feel like I should be going dancing or something instead of staring bleary eyed at my computer screen.

Hey, so guess what? Pregger Brain. I haz it. In other words, IT HAS BEGUN.

Sometimes I can slide by with only minor injuries, sometimes I just fumble and bumble until I collapse in a heap on the floor. Yesterday was one of those latter days. Has anyone seen Latter Days? It was surprisingly sweet. OH! I really, really need to see The Book of Mormon after seeing the Tony performance. Too bad I’m not in New York, eh? Although it probably wouldn’t matter seeing as it’s sold out for all eternity.

And now, since I no longer want to type words… let’s drool over some Chie Miharas, shall we?

Yes, I am wearing rain boots/galoshes/wellies in JULY. O_O And cardigans. This is Portland, after all.

I really like the look of this AA skirt over my ON dress, although it kind of looks like I’m wearing an apron.

After a rainy start this week, the sun is back out. We took the boys to the park yesterday after I got home from work. First off, can someone please explain to me why teenagers choose to hang out at play structures? Surely they’ve got “cooler” places to go. Maybe they could take their lowrider bikes and their badly sagging pants elsewhere? Maybe? Thanks, that would be great.

Anyway, as usual Z ran directly towards the swings yesterday as he likes to “fly to the sky” for a good long while and if you even think about resting your arms he will plead, “Push me! PUSH ME!” If the swing so much as veers to the right or the left he’ll screech, “I’m not twisting! NOT TWISTING!” This time Mad decided to join him. A father – let’s call him Joe- remarked to us, “Oh, no you’re gonna need another swing!” I looked over at him and smiled politely. He was wearing slacks with a black wife beater tucked in and a thin gold necklace. Black hair slicked back, goatee, dress shoes…it was all too good. And in his hands children, were an open can of Keystone Light and an unlit cigarette that he kept flicking at reflexively. Yeah. “You’re gonna need another swing,” he said, slurring slightly, gesturing at the two swings and my pregnant belly. Two plus one equals three. Got it. I nodded.

“Are you scared?” he asked, hitching up his slacks and coming closer. Without waiting for an answer he asked me: “Is he five?”

The six year old in question appeared to talk quite well and was especially skilled at talking back which would result in Joe counting down and growling, half the time I wasn’t sure if he was serious or not and neither did the six year old, judging from her giggling retreat. But in the end he spanked her several times, to Z’s horror.

“Yep! Hey, are you flying high to the sky? Weeeeee!”

“He spanked him! Why did he spank him? Because he didn’t listen.”

“That’s right.” I was laughing as quietly as I could, trying not to make eye contact with Joe.

This went on for a while until I suggested that Z take a break from the swings and thankfully he and Mad caught sight of and began to chase a frisbee dog.

The point of my unnecessarily drawn out story is this:

Filed under Adventures, Fun and Games, Preggers in PDX, Stylefile 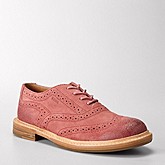 I’m not going to spend another CENT on maternity clothes but this dress is all kinds of cute:

Also, could they TRY to hire pregnant models maybe?

Dress it up (preggo version)

Anyway, I tried layering this awkward length maternity shirt over my awesome Goodwill dress kind of like I did here. To complete this “look” I stole a sash from one of my other dresses and tied it nice and snug above my bump…and then it gradually made its way under my breasts and became lodged there and eventually became soaked with sweat. Ah, boobs. I’ll enjoy them while they last.

I hope everyone had a great 4th! We just took the boys to the park and then came home and barbequed some hot dogs. Then we fell asleep to the sounds of explosions and possibly gunfire. Which reminds me…this one time Andy called my dad for his ribs recipe and successfully made them and we were blissfully full and covered in barbeque sauce afterwards so I’m thinking we should attempt that again at some point. And by we I mean he. Because what is Independence Day without RIBS?!

Here’s a picture of the boys and I standing in a tree circle:

There are about 4 or 5 pregnant women on the campus where I work and yesterday we all congregated in the same place at the same time – THE DINING COMMONS. Dun dun DUN. Pretty much blew everyone’s minds. Painfully engorged stomachs, gently protruding stomachs, stomachs that were just right, oh my! I found myself saying the very thing that I abhor about one of the other women (who is due in about ten days): “Holy testicle Tuesday, she’s HUGE!” But I get a free pass, right? Right. Anyway, we’re all expecting boys. Something is definitely in the water.

I’ll be 27 weeks on Tuesday, almost to the third trimester! I keep telling people that I’m due in September, even though my (technical) due date is October 3rd. Wishful thinking? Yeah. I should really enjoy the calm before the storm, eh? Maybe. Also: Andy’s going to PAX this year, I’ll be 35 weeks along and a little nervous about lumbering painfully after two boys on my own for two days. I’ve enlisted my friend Kerrie to (please! please!) help me out on one of those days.

Remember when I mentioned my obsession with shoes lately? It’s gotten worse. Lately all I want is a pair of Chie Mihara shoes. Or several. Problem is, they cost ALLLLLL of the money. All of it.

in any of these colors. Or all of them. I especially like the white, silver and black and I really detest (maybe that’s too strong a word?) white heels usually. If I have to save for an year and a day (but hopefully not that long!) I WILL have a pair of Chie Mihara’s. Trust.