I sometimes run and chase the moon

Andy‘s post on “No Surrender” inspired me to post one of my favorite songs: “Dreamer” by Toni Childs (this post is in no way an answer to his question, btw). I would say “try listening to this without loving it” but Andy actually doesn’t, which leads me to believe that he might not possess a soul. Hope he does though, because that would suck.

I first heard this song when I caught the tail end of The Last Word with Timothy Hutton in the late 90s. The movie had been looping on either HBO or Showtime, so I managed to catch it again and tape the end of the movie and the credits, basically just the part when the song was playing. Who cares about the actual movie right? The funny thing is: I stopped taping before the song information so I didn’t find out what the song was until it popped up again in Moonlight and Valentino. I immediately thought that Whoopi (who was in the movie) was singing for some reason (odd, I know). I did not think the singer looked even remotely like this:

HA. I crack myself up.

Anyway, I was so excited to finally find out who was singing the song that moved me enough to wait until the end of a movie to tape the credits. I bought the album and although I enjoyed some of her other songs, nothing will ever come close to moving me the way that this one does. I don’t think I’ll ever tire of it. It’s got this other-worldly kind of sound, so achingly beautiful…I just love it.

Trying not to freak out

I dropped the boys off at daycare this morning and I feel incredibly agitated. It’s weird to be in an empty house after 3 months of (mostly) alone time together. I want to relax but I can’t. Argh! This is hard. I have to get back to that place where I can trust someone else to keep my kid(s!) alive/fed/safe. I feel like my spidey senses are working overtime, I’m fighting the urge to drive back over there and check in on them.

Z didn’t even care that I left. He chirped “Buh-bye!” and went back to playing with his cars. I should be relieved that he didn’t kick and scream for me not to leave him, and I guess I am. A little. I want for him to enjoy his time there, I do. But I also want him to miss me. I’m mostly concerned about little Mad since he hasn’t been taking the bottle so well. The center is close enough to the university that I can drop by and breastfeed him if there is ever an emergency, so why can’t I stop worrying? *sigh* 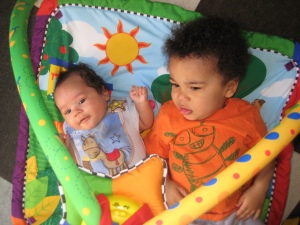 When I grow up

I want to be a mechanic like Megan Fox in Transformers.

That's totes how you look under the hood of a car

No one will really care that I don’t actually know how to fix anything as long as I do stuff like this:

I love getting my hands dirty

In “Revenge,” you flee evil Decepticons for just about the entire movie. At least your male co-stars hauled butt in comfy sneakers — you were in heels!
Megan: Stilettos — and for the last part of the film, motorcycle boots. I had major shinsplints and threw out my back a couple times. Beyond that, Michael likes everyone freakishly tan, so we were painted maroon, like in the old Westerns when they hired Caucasians to play Native Americans. I had on fake eyelashes, running through the desert with sand stuck in them, and I’m sweating off all the makeup. It looked like we were making a tragedy.

For serious???!!! Is that supposed to be a funny anecdote? Because it sounds like a nightmare. But this is just accepted as part of the “Michael Bay experience”. Haha, you know how Bay is! Good times… Argh! I thought she looked dirty in the first film. WTF? So many, many shades of lame.

Here’s an interview with Gabrielle Union re: Bad Boys 2:

UGO:: In that one scene with your wire on that tiny dress – how did that work?

GU: You know, that wire also functioned as my mic for the scene, so it had to work, and we had to make that work. It was very tricky, I will say. Where the pack was…was not the most comfortable of places. You can use your imagination on that one.

UGO:: How are you able to wear those heels?

GU: The Jimmy Choos? They had to go. They cut out this scene where once they save me at the mansion, I have to sprint down the steps, sprint outside, we are running through the thing, jumping into the lagoon, and I am dipping in the grass. They are like, “OK, you look ridiculous.” We had to add this little shot where you see me throwing off my shoes to make it a little more believable, because I was falling down the steps. I was just watching behind-the-scenes footage of the day that we blew up the house, and I’m running down the steps, and you see me falling the whole way down. I don’t know how they cut that together but I was falling the whole way down the steps. It was terrible. Jimmy Choos are made to prance in, not do action movies.

I hate you Michael Bay.

What's in a name?

Z is obsessed with the alphabet. OBSESSED. He knows at least half of the letters so far (if not more), genius that he is. And you can’t read a book to him without him either cutting you off and insisting that you tell him exactly what EVERYTHING is (even things that I can’t really define….what is that? A thingamajig? Ummm…that’s a shadow.) or incessantly repeating a word until you echo it, even though you thought you’d already moved on. He will not move on unless he’s damn good and ready, and with each utterance of the word his pronunciation gets even more adorable.

He’s having a hard time with Q since it looks like an O, but I could have sworn I heard something resembling a Q today. YES! I’m thinking of buying some alphabet cards to put on the wall in his room, he’ll love that.

He’s also getting better about calling animals by their names and not simply calling anything and everything a dog. But let’s not get ahead of ourselves: most things are still dogs. Everything in a Dr. Seuss book is probably a dog, since there literally is the lack of a better word. Or it might be a bird. He likes birds. One day when we were on a walk around the neighborhood (FINALLY got a double stroller – I love it!) We had to stop and stare for about five minutes at a crow collecting twigs and stuff for it’s nest while Z screeched “Birrrrd. BIIIIIRD.” The thing finally flew away and Z kept twisting around to look for it so I said, “Bye bye birdie.” to signal that it was time to move on. Now every time he sees a bird he says, “Buh-bye. Buh-bye birdie. Buh-bye.” Precious? Indubitably.

Speaking of proper names, I would never have thought Madrox would be so darn hard for everyone to pronounce. Really people? This was an honest to God exchange between me and my step-mil:

Um. Yeeeeeeah. I hope he never has a friend named Richard.

I’ve been looking for a proper pair of t-straps and these are perfect. 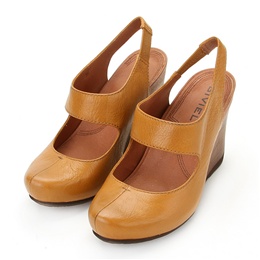 Love the color and style, and they look extremely comfortable!

Perfect for the summer months ahead…